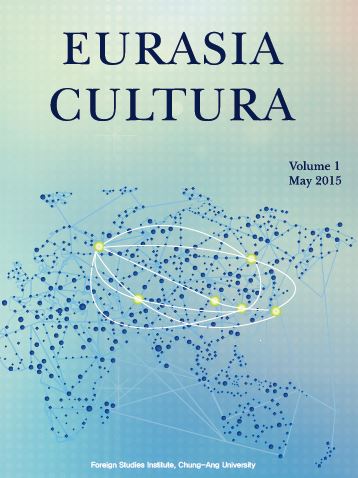 Eurasia Cultura is a peer-reviewed academic journal that publishes original and innovative research on culture, cultural theory,  comparative cultures, and culture-related topics in the region of Eurasia, which includes Korea, Russia, China, Japan, Mongolia, Central Asia, and the European countries. The aim of Eurasia Cultura is to facilitate original research, academic innovation, and interdisciplinary or multi-disciplinary research on Eurasia from a cultural perspective. Eurasia Cultura is an annual English journal that is published by the Foreign Studies Institute (FSI) at Chung-Ang University.

Eurasia Cultura publishes original articles, research notes, and book reviews associated with culture and cultural theory related to Eurasia focusing on Northeast Asia (Russia, China, Korea, Japan, Mongolia, and Taiwan, etc.) and Central Asia from a perspective of humanities. All papers are subject to anonymous peer review. Experts in the field of submitted papers will evaluate all submitted papers on the ground of creativity, quality of scholarship, academic contribution to the field of research, and so on. Paper submission guidelines are as follows:

1. An article length should be between 8,000~10,000 words, including references, notes, and abstract.
2. A research note should be no longer than 6,000 words in length, including references, notes, and abstract
3. A review essay should be between 3,000 ~ 4,000 words.
4. A book review should be no more than 1,000 words.
5. All articles and research notes should include an abstract of not more than 180 words and 5~7 keywords.
6. All figures and tables should be numbered. Their positions should be referred to in the text.
7. Papers are preferred to be typed in double spaces, in Times New Roman without any justification.
8. All submitted manuscripts must not be previously published either in part or in whole and not be currently being considered by any other journal for publication.
9. All manuscripts should be formatted according to APA style. (cf. Publication Manual of the American Psychological Association, 6th edition, 2010).
10. APA does not recommend the use of footnotes and endnotes. In-text-citation is preferable in APA style.
11. Paper submission should be made via e-mail to: fsieditor@cau.ac.kr

For queries, please contact the editorial office at fsieditor@cau.ac.kr